Irene Baron was named "Top Female Writer of the Year 2020" by the International Association of Top Professionals (IAOTP)
.
Irene Baron was presented with the Albert Nelson Marquis Lifetime Achievement Award by Marquis Who's Who 2020 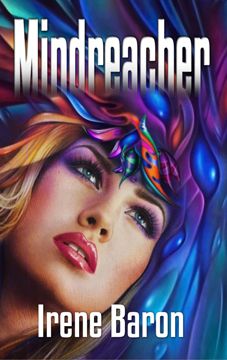 The mindreacher series of international thrillers creates a world that does not exist according to our "current knowledge of reality." Such speculative fiction changes over time as knowledge and technology changes. This style of writing may be a precursor to future facts.

Mindreacher is the first book in the psychological and geopolitical hi-tech thriller series that addresses how the United States will continue to explore using telepathy to ID terrorists threatening to destroy the country. Superior telepaths, the 'mindreachers,' born in Johannesburg, South Africa decades ago, disappeared.  They must be found to help bring world peace.

An innocent female telepath and her USMC protector, who detests anything psychic, are key figures throughout the series.

Each novel takes place in a different part of the world. This enriches readers with different cultures, religions, architecture, people, customs, and how terrorists affect different populations, governments and surrounding countries.

Action is nonstop. Readers will be entertained with excitement and humor while learning the latest and near-future technology.

This series will change how you think about psychic phenomena and how it can be used in fighting terrorists and combat.

Mindreacher is filled with terrorists, technology, telepathy, and global adventures of an American duo battling assassins from al-Qaeda groups and their amoebic offspring who don't want to be identified. The duo is on every international terrorist kill list. Action is nonstop.

The initial action-packed thriller in the mindreacher series, blending current and future technology with paranormal activity, has attracted a broad spectrum of followers of all ages.

New York Gotham Writers workshop participants and others have compared MINDREACHER to a cross between the genres of the Clive Cussler and Indiana Jones.

Female readers of all ages will be thrilled learning about an innocent, middle-aged, telepathic heroine entangled in the intrigues of the government and her dangerous international search for a mindreacher.

Male readers will empathize with the elite U.S. Marine Corps officer who dislikes anything psychic. He's assigned to protect a female telepath who has never dealt with the government or military. They endure death threatening events on land, water, and in the air.

Readers should expect surprises. Everyone will enjoy the humor.

5 Stars -  ... intense sci-fi thriller! ... I was swept off my feet by a far more complex scenario.  ... what startled me about this story was just how different a path it took. It is loaded with psychological and scientific intricacies that really make you wonder. For instance, if a group of children is telepathic, what would that mean for their learning capabilities? Their emotional and intellectual growth? Their behavior? Would they even bother to speak verbally? These questions are within the first few chapters and they don't stop as the story picks up the pace and asks even deeper questions while dodging assassins.  It's a bit like Jurassic Park, but instead of dinosaurs, its psychics. The science is dense and the ethical complications are thought-provoking. This book will change everything you think you know about psychics. I highly suggest this to anyone who loves science fiction or is interested in psychics.  Author: Theophoanes Avery

5 Stars - Mindreacher is a top-notch geopolitical sci-fi thriller that is epic in scope, truly original and encyclopedic in its details. Irene imbues the novel with ideas that only someone with her amazing personal biography could bring to a novel of this kind. This is the second book of Irene's I've read and this one, like her Mary KNew, is written with such clarity that even the most complex concepts are very easy to grasp. In Mindreacher the United States faces nuclear destruction by terrorists unless a mindreacher - a person with telepathic power - can be found to assist in locating the terrorists. Enter a U.S. Marine who adds dash and heroism to the story that expands the globe. ... at the back of the novel is a detailed glossary and five pages of references. (Did I mention the novel is filled with facts?) I highly recommend this book.  Author: Steve Carr

5-Stars - A great summer read. I think this story was unique in that it portrayed a character with extraordinary mental capabilities who embarked on a worldwide adventure to find others with similar capabilities in order to combat terrorists. I highly recommend this book.   J. Worthington

5-Stars - Time for another indie book review and let me tell you this one was mind-blowing! This intense science fiction thriller will make you question everything you thought you knew about psychic ability all while taking you along to thwart terrorist attacks with the power of the mind. Extremely thought-provoking. Will make any sci-fi thriller junkie jump with glee. Theophanes Avery

5 Stars - It was difficult to differentiate between fact and fiction. A good read. Vicki Whitacre, M.D.  Beta Reader

5 Stars - This novel reads like a blend of Clive Cussler and Indiana Jones. Full of excitement! Sandy Wickersham McWhorter, Editor

5 Stars - I was fascinated to learn so much about the human mind. I didn't want it to end. Kathy Brantley, Reader

5 Stars - Once I started reading, I couldn't put it down. Catherine Frompovich, Editor

SNIPER RIFLES: In Mindreacher, a 50-caliber ROBAR rifle is used by a Sri Lanka sniper. Irene practiced with the ROBAR and other 50 caliber firearms using a one-inch thick steel target 500-yards to experience the feel of the weapon.

She said, "What an experience! I love the ROBAR! So smooth. No recoil."  She added that she couldn't see bullets hit the target, but she could hear the impact as it hit steel.

Irene followed the USMC instructor manual used to teach Marines how to become snipers. She stated, "You have to write about something you know.  I needed to know what it was like to fire large caliber rifles and see how difficult it is to pinpoint your shot. After reading that section of MINDREACHER, my readers will know what it feels like to use a sniper rifle." Readers can learn more about Robar services and products at: https://robarguns.com/place-an-order/precision-rifles/50-bmg/.

Irene Baron sincerely thanks members of the U.S. Marine Corps (retired) that provided many different caliber rifles, pistols and other firearms with ammunition. Over a period of several years, she used their remote and private, outdoor firing range. She became proficient with the Robar hitting the steel bull's eye at 500-yards! Being able to consistently hit the bullseye gave her much satisfaction.

SOCIAL SITE SHARING NOTE:
This domain host for mindreacher.net and irenebaron.com does not offer Facebook, Twitter or other logo 'widgets' to share one of my pages or blogs to YOUR sites with one click. Currently, to share one of my pages to your social site, copy the URL at the top of the page you wish to share, go to your social site, enter the URL on your social site post area (along with your comment if desired) and then post/share. I deeply apologize for the inconvenience.  I will so appreciate your sharing my pages.
Thank you for your understanding and patience at this time.

Thailand and Laos in SE Asia are dominant countries in the first Mindreacher thriller of the series..

South Africa is also a dominant country in the first Mindreacher thriller of the series.