Lovers of science may wish to learn a few details about research for the second Mindreacher novel, especially concerning volcanoes.

Writing the second book in the mindreacher thriller series, “Mindreacher – The Galapagos Incident,” involves knowing and understanding the geology of the volatile plume of liquid rock (magma) under the surface of the earth moving up under the Galapagos Islands in the South Pacific Ocean. See chart below left. 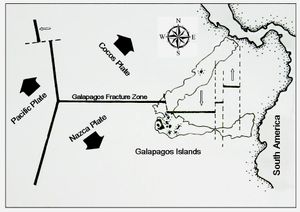 A 2004 government study proved the Galapagos area IS above a deep mass of high-temperature magma. It is deeper than the Yellowstone Park magma. I used the data to create a fictional and dangerous situation.

My ideas included cracks in the earth linking this dangerous magma mass to volcanic Tower Island in the Galapagos. Releasing pressure at the top of the plume would result in the destruction of not only one volcano, but perhaps many in the Galapagos area.

The main sinister terrorist in this Mindreacher sequel is trying to become known as a top international al-Qaeda terrorist within all the proliferating amoebic al-Qaeda cells on Earth. His reprehensible scheme to change the leading countries around the globe with one act requires him to have a geology background. He is not dumb.  Intelligent and conniving, his goal is to have Muslims to rule the world.

He wants to set off that plume of super-hot magma. Because of extenuating circumstances, if he is successful the global relations will change forever. Intriguing side stories help make this novel excitingly refreshing and new.

Readers learning of situations never before conceived by authors will be intrigued by the novel concepts. This is the type of story they have been looking for since they first learned to read. 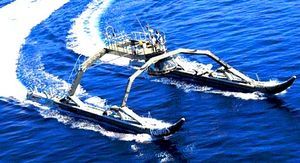 I wrote into the novel a US Navy Spearhead class ship and crew assigned to help Ana Masterson and Major Jon Coulter, USMC, who are on a secret assignment for the President of the United States. Another ship in the novel is a private humanitarian yacht manned primarily by Australian LGBT men volunteering to monitor international environmental ocean conditions. They volunteer in this life-threatening situation to help the United States. There is also a unique catamaran terrorist vessel similar to the MAR Proteus vessel pictured below left. This ship was designed by Ugo Conti and built by the Marine Advanced Robotics (FKA Marine Advanced Research) in Seattle, Washington.  In the story, these ships congregate in the Galapagos area. The ship on the right is a USN Spearhead class ship. 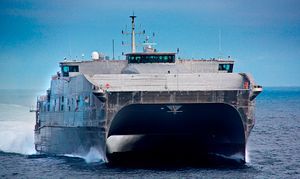 by the United States Geological Survey (USGS) and the National Oceanic and Atmospheric Administration (NOAA). These special maps are used by ship navigators to determine ocean depth.

The colored one below shows a rift area discovered in 2002 in the Galapagos. A rift is where the ocean crustal edges are splitting, merging, or moving past one another. This one has been colored for immediate recognition of high and low areas. The dark blue are deepest areas. White is the highest. Submarines use these maps to keep them from crashing into undersea mountains or hills. Official maps are not all accurate in secret areas of heavy submarine use. Such map sites are void of some data.

When teaching my high school students how to make and read maps, I enlarged black and white USGS contour maps of our local area.  I found the address of each student and enlarged the map centered around their house on an 8 1/2" X 11" paper.  They were assigned to color the different elevations to end up with a map similar to the one shown above. 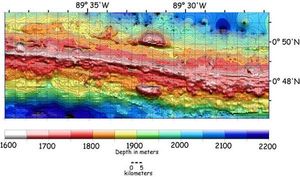 It was special to them because it was of their own property. It also gave them the determination to understand the contour land chart. While they colored, I helped them as needed and lectured about the field of cartography, the making of maps.  It took more than one day to do the coloring.

A second part of that laboratory project was for each student to receive a copy of their original topographic map. They were to cut out the different elevations as patterns to make a 3D map of the same site.

In step three, the newly cut patterns were used to cut foam board or tagboard.  The different elevations were glued together. Using poster board paints in whatever color they desired, the resulting 3D projects were painted with each elevation having a different color, similar to the colorful map above.

The colorful and educational resulting projects were displayed. What a display! They all did a great job and ended with a fantastic product. Parents were surprised and pleased to have several maps of their property.

I also used such projects when teaching astronomy. The contour maps students used in astronomy were geological features of Mars, like Hellas Crater.I used Planetary Geology lab books from the University of Arizona. I had the best students! Their results were spectacular!

NOTE: I have been blessed to have been a recipient of the National Science Foundation’s (NFS) graduate study programs which enriched my knowledge and resulted in my becoming an award-winning science teacher. At Texas A&M University in College Station, my graduate classes included Geology, Mineralogy, Oceanography and Meteorology. At Portland State University, the program involved transporting us to almost every volcano in the Cascade range from Shasta in northern California through the state of Washington. Earthquakes were studied at Missouri State University in Columbia.

It was through National Science Foundation graduate studies I gained valuable knowledge. Every minute of opportunity and experience helped me become an award-winning teacher and author.